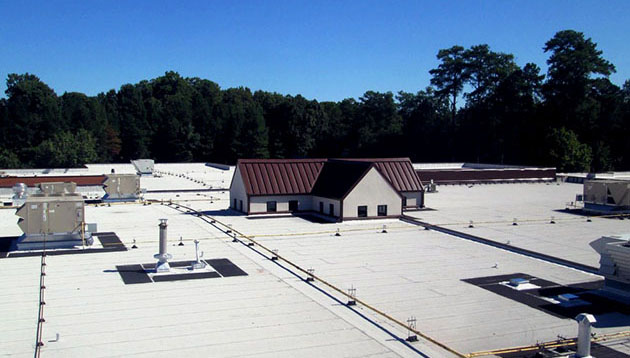 Hightower Trail Middle School of the Cobb County School District in Georgia was experiencing water infiltration through the built-up roofing, the metal roof panels, brick walls above the roofing, and the EIFS and windows at a center clerestory structure. Raymond was directly solicited to provide A/E services associated with the roof replacement, replacement of the EIFS and windows at the clerestory, and modifications necessary to prevent water infiltration through the brick.  It was our assumption that water through the bricks was the result of no through-wall flashing, and we discussed with the Owner representatives at the charrette meeting repair recommendations that included installing through-wall flashing or installing metal wall panels over the bricks.

During our field work it was confirmed that there were no through-wall flashing at the bricks, and the Owner decided that metal wall panels over the bricks would be the simplest solution.  It was our assumption that due to the accumulation of mold and mildew at the EIFS that the existing system was retaining water and not properly draining.  We designed a draining EIFS system to ensure that a drainage medium was provided behind the EIFS to allow residual water entering the system to exit.  We designed the removal of the existing asphaltic built-up roofing system, and the installation of a new asphaltic modified bitumen roofing system.  The metal roof panels at the clerestory where removed and a new double-locked standing seam metal panel roof system was designed.  The windows at the clerestory had to be removed to properly install new EIFS and building wrap, and therefore, the Owner elected to replace the windows at this time.  We designed new structural, impact resistant windows to be installed at the removed locations.  These insulated windows units were double-paned and argon filled with a low-e coating on the 2nd surface to provide an insulating and UV / infrared light sheltering fenestration.

The brick cladding over the roofing was leaking.  Through our investigations we determined the leaks where likely attributed to the walls not having a through-wall flashing system. We designed a metal wall panels system over the brick cladding, providing a simple solution to infiltration. Additionally, the top of the parapets did not have wood blocking. We developed a design to install wood blocking on top of the parapet by setting dowels in cement so that the construction process would not be slowed. The new roof system increased the overall roofing R-value by providing a more reflective roof cover; ultimately reducing operating costs. 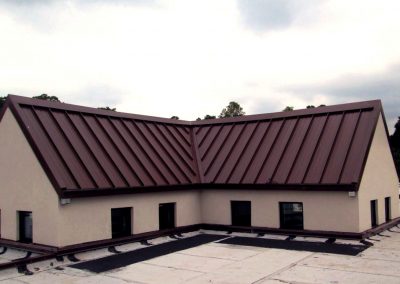 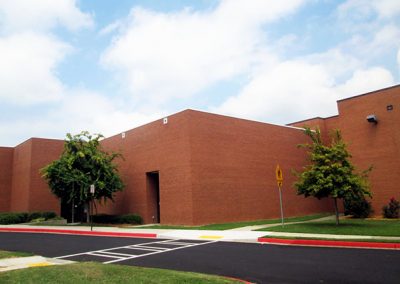 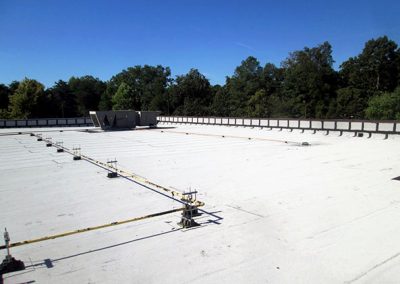